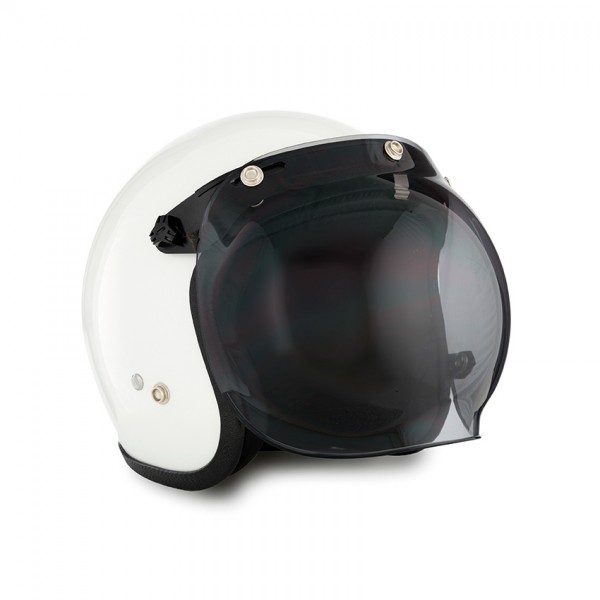 Why buy from our store?

The latest generation of the 70's bubble folding mechanism ALU is made of aluminum and is significantly more stable than its predecessor made of polycarbonate.

It allows you to open and close a bubble visor infinitely, adjustable via two easy-to-use adjusting screws at the ends. Fixed with adjustable snaps, two rubber suction cups provide an even more solid connection between helmet and bubble. This accessory also fits with other than 70's bubble visors such as from BILTWELL or BELL, as well as the helmets of the same brands and those from DMD.

NOTE! The universal 70's folding mechanism consists of two rails with push buttons. A rail is fastened to the press studs of your jet helmet, on the second you lock the bubble visor. When processing, the emphasis was placed on the fact that your bubble visor is located much closer to the helmet than its predecessor - to seal more strongly against wind and driving noise.

Recommendation: The 70's folding mechanism ALU is ideal for city traffic or country roads to be able to fold the visor. It is also recommended for spectacle wearers. If you go for high speed, we recommend to attach the visor directly to the helmet.

This 70's visor folding mechanism also works with other helmets, such as the BILTWELL Bonanza, BELL Custom 500 or with the DMD Vintage open face helmets. The bubble visors from BILTWELL and BELL also work in the combination - HEDON helmets don’t.

this one has a better folding mechanism than the other ones made of plastic.
the two suction caps at the end of the visor keeps everything better in place